19 seasons of Long Island Ducks baseball have come and gone. Players from all around the world and of all varieties of baseball experience have worn the Ducks uniform since the first pitch on April 28, 2000. In that time, they have played in front of nearly 8 million fans in Central Islip, and millions more around the rest of the country. Those players and coaches have also earned three Atlantic League Championships, seven Division Championships, 13 half-season Division Championships and over 1,300 victories. As the Ducks 20th Anniversary Season, presented by Good Samaritan Hospital Medical Center, approaches, it is time to determine which members of the Flock have stood above the rest.

After a week of voting for some of the top right-handed relievers in Ducks history, we now switch over to the southpaws. Lefty relievers are vital pieces to any strong bullpen, whether for match-up purposes with big lefty bats or to be late-inning set-up men. The Ducks have had their fair share of strong left-handed arms throughout their history, and it was not easy determining the three nominees who will vie for a spot on the 20th Anniversary Team. Let’s take a look at the three candidates:

The son of former Major Leaguer Pedro Borbon is our first nominee for the left-handed reliever position. Pedro Borbon Jr. had spent parts of eight seasons in the big leagues before making his way to the Ducks in 2003. The Houston Astros had released the southpaw, and he was looking for a way to get back to the game’s highest level. The Ducks gave him the opportunity, and he responded by posting a 5-2 record with a 2.08 ERA in 32 games (six starts). Borbon Jr. also struck out 50 batters and walked just 14 over 69.1 innings of work. Opportunity came calling, as the St. Louis Cardinals purchased his contract on July 24th. Just five days later, he was back in the big leagues, where he made seven more appearances. The jump made the Dominican Republic native the second Duck in team history to return to the Majors after playing on Long Island, following Carlos Baerga (2001). Borbon Jr. returned to the Ducks briefly in both 2004 and 2005, where he combined to make eight starts. He would also make a couple of appearances with the Bridgeport Bluefish in 2006 before wrapping up his playing career.

The second nominee for this position was part of the Ducks Atlantic League championship team of 2004. Jordan Zimmerman joined Long Island after spending the majority of his career in the Seattle Mariners organization, reaching the Major Leagues for 12 games in 1999. As a member of the Flock, he helped serve as a set-up man to closer Bill Simas. Zimmerman made 50 appearances during the 2004 campaign, second-most in the Atlantic League behind only Camden’s Todd Rizzo (59). He registered a 3-2 record with a miniscule 2.28 ERA and a pair of saves. The Canada native also struck out 36 batters while walking just 16 over 47.1 innings of work. During the postseason, Zimmerman recorded several big outs to keep the Nashua Pride off the scoreboard in the North Division Championship Series. He did the same against Camden in the Atlantic League Championship Series to help give the Flock their first-ever league title. Not a bad way to complete your professional career! 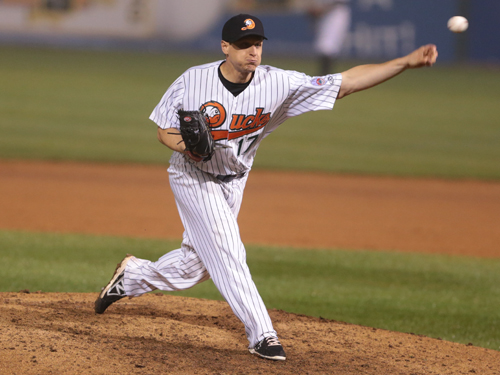 Last among the trio of nominees, but certainly not least, is left-hander Eric Niesen. The former third round draft pick by the Mets first joined the Ducks in 2013. He got off to a terrific start that season, posting a 4-0 record with a 3.23 ERA, one save and 39 strikeouts in 39 innings. Thanks to his strong performance, Niesen’s contract was purchased on July 9th by the Boston Red Sox. After spending time with Double-A Portland and Triple-A Pawtucket that year, he returned to the Ducks in 2014. The southpaw appeared in a team-high 59 games, tied for fifth-most in the league, and turned in a 4-3 record with a stellar 3.06 ERA and 65 strikeouts over 53 innings. Niesen returned for one more year with the Ducks in 2015 where he experimented as a starter as well, making eight appearances overall (four starts) to finish his career in the orange and black. His playing career finished the following season in the Atlantic League with Bridgeport.

We have revealed our three nominees for the left-handed reliever spot on the 20th Anniversary Team. Now, we need your help in determining which of the three will be represented among this exclusive group. Click on the button below to cast your vote from now through next Thursday for either Borbon Jr., Zimmerman or Niesen. The winner, along with the remainder of the 20th Anniversary Team, will be unveiled at the beginning of the 2019 season!

Be sure to check back again next week, as we’ll unveil the three nominees for the closer spot on the 20th Anniversary Team.

Baseball season is officially upon us, Ducks fans. Teams across Major League Baseball and affiliated baseball have begun their respective 2014 seasons. Here on Long Island, we are exactly three weeks from the beginning of the season on April 25. In the meantime, completion of the Ducks 15th Anniversary Team grows near.

Last week, fans had an opportunity to vote for the best right-handed starting pitcher in franchise history. The voting was neck-and-neck for most of the week between two of the candidates as expected. The winner, along with the rest of the “Flock 15” team, will be announced on Friday, May 2 when the Ducks open their 2014 home schedule.

As for this week, the voting moves on to the bullpen. This week’s list of nominees will be comprised of relief pitchers who are not closers. While these relievers have recorded limited saves in their respective Ducks careers, their primary job was not in the closer’s role. Included among the nominees are four Atlantic League championships, six ALPB All-Star Game selections and a pair of franchise record holders. Here are the nominees:

While Grezlovski is not the longest tenured Duck on this list, he does possess the most Atlantic League experience. The Michigan native played eight seasons in independent baseball, six of which came in the Atlantic League. Grezlovski pitched two of those years with the Flock in 2007 and 2008. In that time, the University of Florida alum compiled a 13-4 record with a 3.57 ERA and 110 strikeouts in 125 appearances. In 2007, he finished second in the league in games pitched (58) to fellow-Duck reliever Danny Graves (62). In addition, he earned an All-Star selection and finished the year with a 7-2 record and a 3.39 ERA. The following season, Grezlovski led the league and set a Ducks record with 67 appearances. The righty went 6-2 with a 3.70 ERA in an impressive 87 and two-thirds innings of work.

Hill pitched two years with the Ducks (2011-12), and is one of three nominees in this category that won a championship on Long Island. Overall, the Dix Hills resident went 13-9 with the Flock while compiling a 3.20 ERA, 29 walks and 97 strikeouts in 111 appearances. Hill started off his Ducks career in fine fashion, going 8-2 in 2011 with a 2.91 ERA and one save over 48 games. The eight wins were the most in a single season among all nominees. The next season, he earned an All-Star Game selection by posting a 3.49 ERA in 67 innings pitched. Hill also finished second in the league in appearances (63) during the 2012 season and retired from baseball after helping lead the Flock to the Atlantic League championship. Prior to pitching on Long Island, he enjoyed parts of the 2002 and 2003 season with the Kansas City Royals where he pitched to a 3.48 ERA.

Lansford represents the only nominee that is currently on the Ducks roster. Brother of teammate Josh Lansford, Jared now enters his third season with the Flock. While his regular season numbers are impressive, it’s his postseason statistics that signify Lansford as a premier reliever in Ducks history. Over two championship runs in the postseason, the California native is 3-0 and has allowed just one run over 12 and one-third innings of work (0.73 ERA). In addition, Lansford has 13 strikeouts compared to just nine hits and one walk in 11 postseason appearances. During the regular season, Lansford is a combined 5-3 with a 3.61 ERA, nine saves and 88 strikeouts in 94 games (104 and two-thirds innings pitched). That includes a 2.98 ERA over 54 and one-third innings of work in 2012 and an All-Star Game selection in 2013.

Valentine is the longest tenured Duck amongst the nominees with four years of experience at the Duck Pond (2007-10). He leads all nominees in games played (147), saves (19), innings pitched (154.0) and strikeouts (138). In addition, Valentine is tied with Grezlovski and Hill in wins with 13. The Deer Park native went 13-8 overall with a 2.86 ERA during his four seasons with the Ducks. Valentine earned two ALPB All-Star Game selections (2008-09) and tied a franchise record in appearances with 67 in 2009. In 2007, Valentine led all Atlantic League relievers in ERA (1.54) by allowing just six earned runs over 35 innings of work. Additionally, he went 4-2 with 37 strikeouts compared to just nine walks. In 2009, Valentine led the league in appearances (67) while totaling a 4-2 record and a 2.96 ERA. Prior to joining the Flock, he pitched in 42 games for the Chicago White Sox over three seasons (2003-05).

Wassermann’s one season with the Ducks (2011) stood out enough to warrant a place among this week’s nominees. The Alabama native was a part of a strong bullpen in 2011 which also included fellow nominee Jeremy Hill. That season, Wassermann went 4-1 with a 2.57 ERA and 11 saves in 51 appearances. He also recorded 66 strikeouts compared to 12 walks in 63 innings of work, good for the highest strikeout-per-nine innings ratio among nominees (9.4). For his efforts, Wassermann was named a 2011 Atlantic League All-Star. Before pitching with the Ducks, he made 57 appearances for the Chicago White Sox during the 2007 and 2008 seasons.

Similar to Wassermann, our final nominee also only played one season with Long Island. Zimmerman finished his professional baseball career with the Ducks in 2004, and along with Hill and Lansford, represents the only other nominee to win a championship on Long Island. The righty went 3-2 with a nominee-best 2.28 ERA in his lone season with the Flock. In addition, Zimmerman struck out 36 compared to just 16 walks in his 50 appearances (47 and one-third innings pitched). Possibly the most impressive part of his success was that he had not pitched at all during the 2003 season.

This week’s choice will be even tougher with six nominees to choose from for one spot. Once you’ve made your choice, please be sure to cast your vote in the ballot below. Remember, you can always write in a candidate if you feel someone else is deserving of the position by selecting “other” in the poll below and including the name. Next week, the voting moves on to the best closers in franchise history, and you can bet on an even tougher decision in that category.