We are down to the final two teams that will compete for the Ducks Memorable Moment Madness championship. We had hundreds of fans cast ballots this week for the two Final Four matchups, and voting was fairly close in both the Western and Eastern Brackets. In addition to votes, many fans commented with their reasoning for why they voted for the moment they did, with several acknowledging that these were the hardest matchups to vote for thus far. With that said, here are results from the semifinals of the tournament:

And so, it’s onto the Championship Game of the tournament to decide what the greatest moment in Ducks history has been over the franchise’s first 20 seasons. This is unquestionably an intriguing matchup, with two top-seeds going at it for the crown. The Western Bracket winner comes from the Playoff Moments Region and is a championship-winning play from a 20th Anniversary All-Time Team member. The Eastern Bracket winner hails from the Player Awards Region and also features a 20th Anniversary All-Time Team member who holds several franchise records, including the one that is being recognized in this instance.

For one final time, here are the details regarding the two moments vying for the championship to help you better make your ultimate selection: 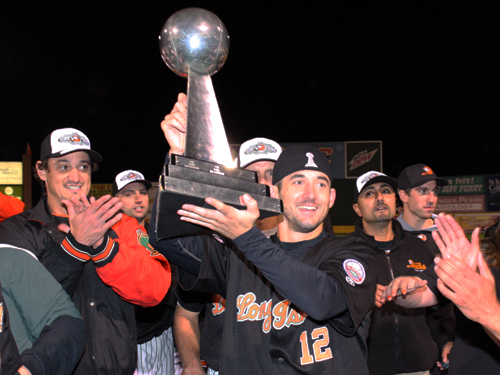 In Game Five of the 2012 Atlantic League Championship Series at Bethpage Ballpark, Ducks shortstop Dan Lyons ended the team’s eight-year title drought in the most unfathomable way possible: A bunt single up the third base line. The perfectly-placed bunt scored Matt Esquivel with the winning run. It remains the only one of Long Island’s four championships to be clinched on their home playing field. Lyons earned Championship Series MVP honors for his heroics. 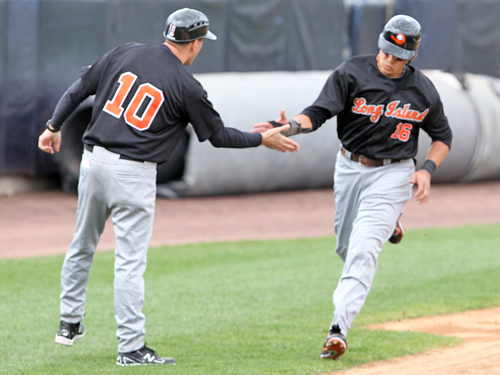 Justin Davies held the record for most hits in Ducks history from the time he retired in 2005 until the 2011 season. At that point, Ray Navarrete had already become the team’s leader in home runs, RBIs, runs scored and doubles. However, on May 22, 2011, he would also become the hits king in dramatic fashion. His go-ahead three-run home run in the ninth inning at York gave him 616 hits in his Ducks career, officially surpassing Davies.

With all the information at your disposal, which memory takes the crown as the greatest in Ducks history? Is it the walk-off bunt single that secured Long Island’s 2012 Atlantic League championship at Bethpage Ballpark? Or is it the dramatic home run that moved Ray Navarrete into sole possession of first place on the Ducks all-time hits list?

Head on over to our Facebook and Twitter pages by clicking the buttons below. Cast your votes over the next 24 hours for the moment you feel is most deserving of being the Memorable Moment Madness champion. We’ll announce the winner on Friday morning as part of the Ducks #OpeningDayatHome festivities.